The mission of the journal

The basic mission of the journal, Jaderná Energie/Jadrová Energia (Nuclear Energy), is to contribute to sustaining the high standards of nuclear safety when using nuclear energy for non-war purposes. The journal is published in the Czech and Slovak languages; selected scientific and technical articles, abstracts and annotations are also published in English. The journal is released four times per year, with 400 printed copies available, and in an electronic format that is available on this website, free of charge.

In this issue, we introduce you the company, ÚJV Řež. We look in detail at the system of assessment of computational programs, designed for analyses of nuclear safety in the Czech Republic. We present the Aarhurs Convention and its applications in the field of nuclear energy. We introduce you to the infrastructure of hot chambers from Research Centre Řež, the National Centre of Energy and to the floating nuclear power plant of Akademik Lomonosov. You will also find information about the summer school of nuclear engineering, observations from past conferences and congresses and news from the field. You will learn about the Costa Concordia accident and what it has to do with a robbery in an American museum, as well as the Czech weld cause. Finally, in this issue, we draw attention to the EIA process in connection with intended building of a new nuclear source at Dukovany Nuclear Power Station. 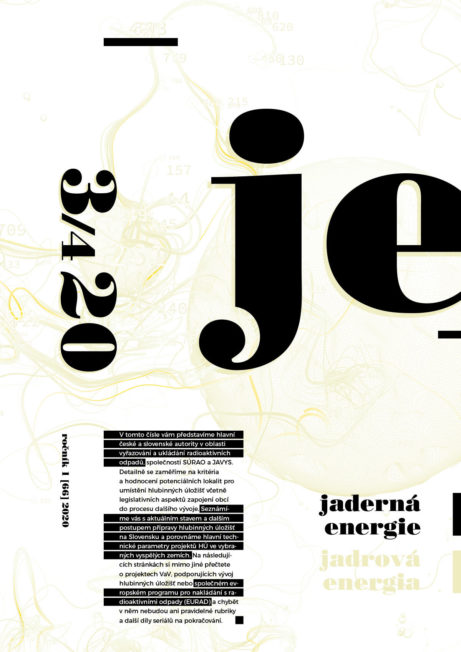 History of the Journal

Nuclear energy in the 1950s

Half of the 1950s was concerned with steep rise of nuclear energy. In 1955, the Faculty of Nuclear Sciences and Physical Engineering was established at Charles University in Czechoslovakia; it later came under administration of the Czech Technical University in Prague. In the same year, the Nuclear Physics Institute of the CAS (Czechoslovak Academy of Sciences), later renamed the Nuclear Research Institute of the CAS, was established in Řež, near Prague, and the national industry began to quickly adapt to a new field - nuclear energetics. Also in 1955, the Energy Institute Prague VII began to publish a scientific and technical journal called Jaderná Energetika (Nuclear Energetics), as a source of information and learning material for enterprises of the former Ministry of Energetics. The first issue of this journal was published on 20 September 1955.

After the dissolution of Czechoslovakia

With a mission to contribute to the preservation of high standards of nuclear safety in the field of using nuclear energy for non-war purposes, Jaderná Energetika continued, even after the dissolution of Czechoslovakia. The journal was renamed Bezpečnost Jaderné Energie/Bezpečnost Jadrovej Energie (Nuclear Safety), and the State Office for Nuclear Safety (SÚJB) and the Nuclear Regulatory Authority of the Slovak Republic became its new publishers. It was reviewed as a scholarly journal from the beginning. 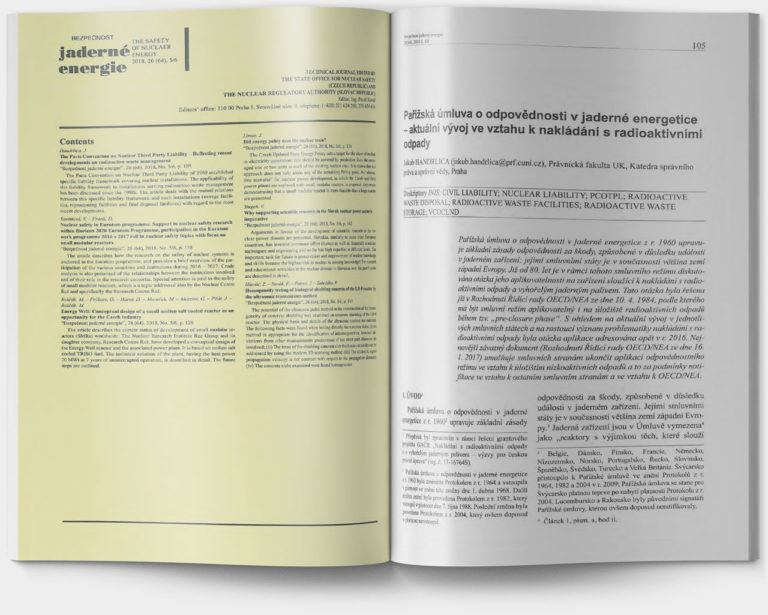 We took the baton

In October 2019, the Research Centre Řež (CVŘ) took the imaginary publishing baton from SÚJB, but the cooperation of the Nuclear Regulatory Authority of the Slovak Republic remains unchanged.